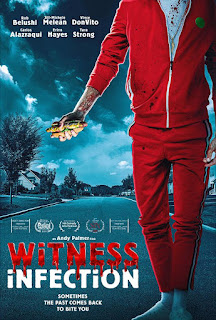 Sometimes the past comes back to bite you. Two rival mob families are transferred from the Witness Protection Agency by mistake to the same city, Temecula, CA.

Witness protection is supposed to be safe, but when it becomes "Witness Infection" things turn deadly for two mob families. Carlo (Robert Belushi) and Gina (Jill-Michele Melean) are just trying to run their dog grooming business, and be together. However, Carlo has some family obligations that are about to get in the way of that. His brother is unable to have children so he can’t marry into the rival mob. This leaves Carlo to fill the void, and save two mob families from another fight.

He’s reluctant to go along with this forced marriage, and expresses that at a dinner where he’s supposed to agree to everything. This upsets his potential bride to be, and threatens the two families ability to live together in witness protection. His father then forces him to go to her father, and make things right. Fearing for his safety, Gina and one of their good friends Vince (Vince Donvito) insist on going with him. They were right to be afraid because they're about to deal with more than the average mobster! 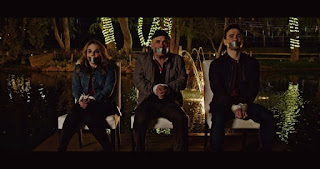 The movie opens with the first the audience sees of the zombie outbreak. It’s a fun scene, but that’s all the audience gets for awhile. It then spends sometime introducing characters particularly the Serrelli family. It plays on some stereotypes of mob families, and some of the characters are a little over the top. Of course they stress the drama between the families, and the need for this arranged marriage to happen. There’s plenty to laugh at especially if the audience likes mob movies.

While all of that is fun, the real entertainment begins when the zombie plague begins to breakout. This outbreak begins because of sandwiches, which are a hit with everyone in town. That means there are plenty of zombies, and zombie killing to come. The audience gets some gross moments seeing people become zombies, and a good scene in a bar with plenty of zombies to kill. There’s even a deer, which helps provide some blood spilling fun, and laughs. 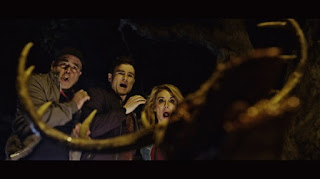 “Witness Infection” is definitely witness protection gone wrong! Putting one mob family in protection is one thing, but adding a rival family along with them is a big mistake on its own. To their credit the families do have a way to co-exist, but that plan seemed destine to fail. It fails with both of the Serrelli brothers, and once more when zombies take over the town. This helps the film provide plenty of laughs before the zombies swarm the town. Once that happens, there’s many more hilarious moments, and more importantly blood splattering fun. With that, I give it 3 pools of blood, and won’t be eating any sandwiches anytime soon!