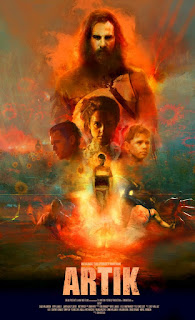 A comic book obsessed serial killer teaches his son how to get away with a series of brutal murders until the boy befriends a mysterious man who threatens to expose everything.

Written and directed by: Tom Botchii

Chase Williamson stars as straight-edge badass Holton Shudcase trying to overcome his past and his flaws; it isn't until he encounters Boy Adam (brilliantly portrayed by Gavin White) that he has to confront his demons, literally, when he is faced with the titular character, Artik. Artik will go to any length to get what he wants from Holton, even if that means forcing him to consume his truest poison, attacking his straight-edge nature, which cements Artik as the comic book villan in Holton's life. Jerry G. Angelo gives a wonderful, albeit occasionally quiet, performance as Artik, making you sit on the edge of your seat for the entirety of the film. Nearly every time Angelo is on screen my anxiety was akin to getting a fork shoved through my cheek. His mixture of physical and mental torture, the mental is more evident in his dealings with Holton, makes him a deadly force to be reckoned with . Rounding out the cast is the ever entrancing Lauren Ashley Carter playing Flin Brays; a doting wife who just wants her enclave of slave boys to give her a successful harvest.

Artik is expertly propelled by its score and cinematography. This film marks Botchii's third collaboration with Director of Photography Martin Moody--what a match made in heaven. Botchii and Moody (which sounds like a neo-noir couple of detectives) have created a fluidity with their filmmaking fraternization. The cinematography is expertly paired with a Jaws-esque (in making history, not sound) score. While the directing, editing, and [extremely fun] gore make this film a tsunami of suspense, the score taps into the base of your spinal chord and does NOT let you go--hook this film up to a defibrillator because it could resuscitate the life back into the deadest of the dead.

While Lauren Ashley Carter gets many scenes to shine, none is more apparent than her role in the denouement. There is a chaotically intense fight scene, again fight choreography by Botchii, between her and Holton that shows just how far she will go to make sure her noxious way of life does not change. This is a role that seems suited specifically for Carter, as she fully embodies this character bringing such incredible life to this immoral human.

While no film is without its flaws, the pros significantly outweigh the minuscule cons of this film; especially if you consume it under the predisposition of a live comic book adaption. There are a few times where Angelo’s voice is a grumbled, but this just seems to add to the terror of the film. The only thing I could ask for of this film is 30 more minutes- - or at least a live feed of Artik’s torture chair.

Overall this film is a fresh sunflower in a meadow of terrible Hollywood [horror] drivel. It truly makes sense Artik is being distributed by Dread. At the end of the day I’d give Artik 8 blood soaked sunflowers out of 10.

Art and Details Released for ARTIK Disc - On VOD and Blu-Ray Sept. 10, in theaters Sept. 6 from Epic Pictures and Dread
Posted by HorrO at 2:03 PM