OTHER SIDE OF THE BOX REVIEW 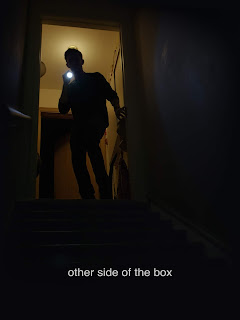 A couple receives a mysterious package from an old friend.

Ben (Nick Tag) and Rachel (Teagan Rose) are enjoying an evening together cooking when they get an unexpected visit from their friend Shawn (Josh Schell). Shawn has brought Ben a gift, which seems odd because of the awkwardness between the two, and that Rachel doesn’t want to see him. As soon as Ben unwraps the present, Shawn takes off with no explanations except for a card with instructions on it. This is no ordinary box, as it seems to have a hole in it with no bottom. It quickly goes from strange to creepy when something pops out of the box.
Part of the instructions is for Ben to keep his eyes on the box, but the audience probably does a better job of that than him. Lots of questions will come to mind, but so will the need to see what happens next. Like “Gremlins,” all they have to do is follow the instructions, but of course they don’t. This sets up for a terrific final scene full of suspense, and definitely creepy as hell!
“The Other Side of the Box” may leave a lot of questions unanswered, but the mystery is part of what makes this a great short horror film. Not knowing what’s happening with this box keeps the fear level high for the characters, and unpredictable for the audience. The final scene sets up so well in maintaining why the instructions are so important to follow. This is lights out a must see film if you get the chance to see it!