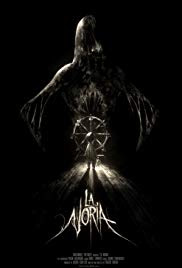 A young boy who loves to draw and build ferris wheels encounters strange creatures that turn his life upside down.

A little boy is alone in his room with his teddy bear trying to finish building a ferris wheel. It appears he has the final piece, but he can’t get it to fit right on the wheel. He tries and tries, but ends up breaking the wheel, and losing the piece. Already pretty upset at with his struggles, a creature appears out of the dark causing the boy to escape his room. He may have escaped that creature, but other creatures of the house take their turns seeking him out.
When the film begins the audience may have to adjust their eyes. This is an animated short film, but it looks so realistic. For the most part it’s dark with just enough light shining on the boy. Everything is done with such detail, but nothing matches the wicked creatures. It’s just magical when the film finally lights up in the end.
“La Noria” is such a stunning film to watch that it may be easy to forget a very touching story is also being told. The boy has lost his father, and is experiencing the grief that comes with that. It shows that even young boys are forced to face their demons. In the end, the boy survives his moment of loss to enjoy a moment with great memories.