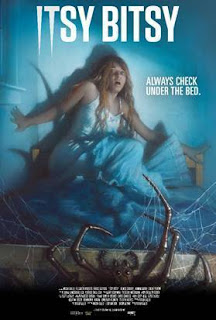 Based on the centuries old poem, a family moves into a secluded mansion where they soon find themselves being targeted by an entity taking the form of a giant spider.

The ‘Itsy Bitsy Spider’ in the popular nursery rhyme seems like such a nice and friendly creature. So nice even kids could play with it instead of just singing about it. The not so ‘Itsy Bitsy Spider’ in “Itsy Bitsy” isn’t one kids or adults should be messing with. Unfortunately for the Spencer family, they find themselves in a sticky situation when they get tangled up with an oversized spider.
This isn’t a typical Syfy type movie where several dozen spiders are just roaming around killing people left and right. There are several storylines going on starting with the origin of the spider goddess. The story is brought to the present when the spider vase ends up in the hands of Walter (Bruce Davison). He’s a collector of ancient artifacts, but has come about this piece under some shady circumstances.
Struggling single mother Kara (Elizabeth Roberts), along with her young children Jesse (Arman Darbo) and Cambria (Chloe Perrin) move into a vacant house next to Walter. Kara is a nurse, who has been hired to help out Walter. This leaves Jesse to take care of his little sister, and he’s not too happy about it. He continues to argue with his mother about her responsibilities, while she struggles to cope with a traumatic past event.
So where does the spider come in? It does a lot of lurking in the dark until it really makes its presence known. Its bite is nasty and definitely deadly. Kara does a lot of facing her own demons, and now she has to face a killer spider to save her kids. All the stories comes together in the struggle for survival for both the family and spider.
Credit “Itsy Bitsy” for not taking the route of having an army of spiders just killing everyone they see. The film takes time to give the spider a history, and reason to be in present time. Everything is revealed when need be. The family goes through real struggles before they even cross paths with the spider. The spider’s history came from sacrifice, and that’s something the family learns. With that, I’m going to stay out of the spider web and give it 3 pools of blood.