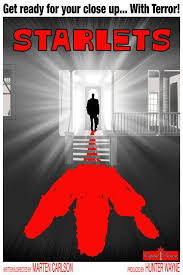 An entertainment attorney travels to an isolated farmhouse for contract negotiations and must outsmart an aging film star… If he wants to survive the night.

Directed and written by: Marten Carlson

Biggs Thomilson (Ryan Gibson) shows up to a farmhouse late at night. Upon walking on the porch, he’s met with a shotgun in his face. Milly Connors (Jill Bailey), mother of the famous Lentz Triplets and film star, is just making sure no one is there to bother the triplets. Biggs is there to deliver a contract for the girls. Once inside and after some conversation, he ends up staying the night because he’s there for more than a signature on some papers.
What stands out about this film is it’s very old school, so old school that it’s in black and white. A small location, and weird conversation helps it out, but the score helps move it along nicely. Both Biggs and Milly are clearly hiding something so it’s just a matter of figuring out what that is. Is Biggs the one who’s up to no good, or is there something Milly doesn’t want him to know?
“Starlets” is a short film that fans of the Twilight Zone might like. It’s got that same kind of feel to it. There’s a mystery here, but not all too hard to solve. It’s just a matter of how it all ends, and the star of this show shines in the end.