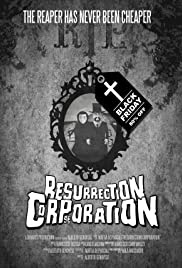 Caligari is a famous undertaker who’s been on the streets since death itself was banned in the city and supplanted by a practical method of resurrection.

“Resurrection Corporation” presents a very interesting predicament for an undertaker, in this case, Caligari. What do you do if no one dies? Alright, maybe they do die, but the Resurrection Corporation has found a way to bring them back. So for Caligari, there’s no one to bury except for his now dying business, and sanity.
He doesn’t just accept this as he tries to come up with his own techniques to bring people back, but that’s not working either. His assistant Bruta stands by his side as the situation begins to drive him mad. He decides the next move is to find out more about this corporation, and the key to their success. This is where things bloody, wild, and even much stranger!
That all sounds good, and is made much better by the fact that this is all animated. Yes, this is a full length animated feature that is really well done. Animation that’s black and white, and with plenty of detail. In a way, the style is kind of similar to ‘South Park,’ and the story is definitely like one of their crazier episodes.
Just because this is animated doesn’t mean this is like a kid’s cartoon. There’s plenty of black and white blood spilled. Whether it’s the people who haven’t been resurrected yet, or the zombie like people in the streets, they’re all fair game. Heads are chopped off, mutants are formed, and why not throw in an animated sex scene!
“Resurrection Corporation” turns out to be such a crazy story that it could only be done in animated fashion. They do a fantastic job with the animation, and it looks so great in black and white. This is truly a horror story filled with zombie like people, mutants, and blood. As out of control as Caligari becomes the audience will still find a way to root for him in the end. With that, I give it 3.5 pools of blood!

You can find the film on Amazon Prime Video US & UK https://www.amazon.com/Resurrection-Corporation-Alessandro-Bianchi/dp/B08V5H5FJK and watch the trailer at: https://www.youtube.com/watch?v=wkXmqLpLBAM


More info about the film can be found at: http://promotehorror.com/2021/05/14/1844-entertainments-new-film-resurrection-corporation-now-on-amazon-prime-video/
Posted by HorrO at 9:00 AM