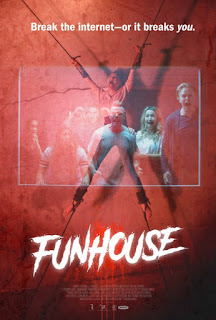 When 8 celebrities from around the globe are invited to compete in an online reality show, they soon realize that they are playing for their very lives, as those voted off suffer horrific consequences, broadcast live to the entire world.

This isn’t the kind of “Funhouse” you’ll find at a carnival or fair! The funhouse here is where a collection of so-called reality stars have come to play a game for a chance at $5 million. The stars have to stay in the home, and can do whatever they want while they’re there. Their goal is to please the viewing audience who will be voting for their favorite every few days. The true fun will begin for the person with the least amount of votes.

Trying to win the competition are the likes of Kasper Nordin (Valter Skarsgard), who’s the ex of a pop star and kind of plays Mr. Nice Guy. Opposite of him is the more hot headed former MMA fighter James “Headstone” Malone (Christopher Gerard). The women are led by blogger Ximena Torres (Gigi Saul Guerrero), and influencer Ula La More (Karolina Benefield). These reality stars and others are about to see just how real things can get. 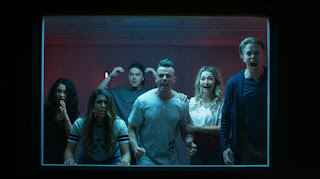 The film gets off to a great start with a woman being forced to murder someone, and take out their heart. Apparently she was the winner of the previous competition, and is given her prize money before getting sent on her way. Unfortunately then the audience is subjected to a reality show for awhile. The players are introduced with a little background about them as they get comfortable. If you hate reality shows like I do then you’ll probably be annoyed by this. And if you ever wished ill on reality stars, or even wonder why they’re considered a star to start with then you might enjoy what comes next.

The person or persons who come in with the least amount of votes have to play a game. A very deadly game that usually ends very bloody. The audience gets games involving an axe fight, a street fight, and even a misplaced chess match. The fun really is watching them get beat up, split apart, and melted away! The mastermind of this all hides behind a panda disguise because why not. As weird as that is at least they have a good reason for all of this. 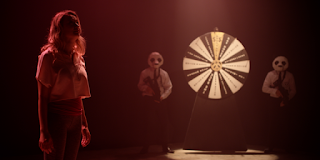 There are probably two big reasons why I enjoyed this film. One is that I completely agree that there are just way too many people who think they’re reality stars. Many whose stardom could be questioned from the start, and others you wish would just go away. The second reason is the whole “Saw” like angle of doing away with these people. Some of the games are more creative than others, but the blood spilt is always fun. If you placed you’re bet on a winner from the start, I’m guessing you would be wrong, which is another plus. With that, this is one reality show I enjoyed so I give “Funhouse” 3 pools of blood.