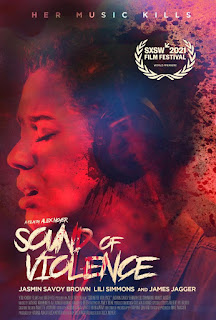 Alexis recovered her hearing after witnessing the brutal murder of her family when she was ten. The visceral experience awakened synesthetic abilities in her and started her on an orphaned path of self-discovery through the healing tones of brutal violence. She goes on to pursue a career teaching and experimenting to find new sounds. She is supported and loved by her roommate Marie who is unaware of the dark secrets behind Alexis’ unique music and the part she unknowingly plays. Faced with the likelihood of losing her hearing again, Alexis escalates her pursuit of her masterpiece through gruesome sound experiments and devastating designs. She won’t let anything stop her, not even love.

Directed and written by: Alex Noyer

If there really is a “Sound of Violence” this film will make the audience hear it. The film opens with Alexis (Jasmin Savoy Brown) as a young girl living in an unstable family environment. Unstable mostly because of abuse handed out by her father. While beating on his wife one night Alexis decides to save her mom, and bash in her father’s brains. This causes a sensation in her, and brings back her hearing. From here on out, she grows up being obsessed with sound and music.

She now spends her early adult years learning and teaching music, and trying to turn sounds into music. When not around music she’s hanging out with her best friend and roommate Marie (Lili Simmons). It seems like there might be something more there between the two, but Marie also has a boyfriend. Anyways, life seems like it’s going well for Alexis until she appears to be losing her hearing again. To get it back she turns to violence, which soon becomes an obsession with finding the perfect sound of violence. 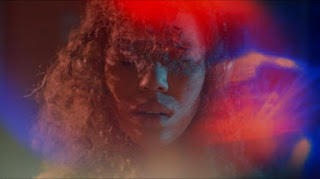 With “Violence” in the title, the audience will want to see it, and they’ll definitely get it! The movie gets off to a great start having a little girl kill her father like he was a zombie. However, that’s nothing compared to some of the crazy stuff to come. Alexis inflicts as much pain as possible in her victims in order to find the right sound, and satisfy the sensation in her. She finds unusual ways to combine music and torture together to produce these sounds. Lets just say she would make Jigsaw proud, especially with her final kill.

While the audience enjoys the kills, they’ll also be experiencing something else. Alexis might have Synesthesia, which basically means when one sense is activated another unexpected sense can be activated at the same time. When the sounds hit her, she’s also experiencing seeing all kinds of colors. The audience sees this as well, and is exposed to flashes of bright colors on the screen. Yes, it looks good, but it can be a little distracting.

Alexis is an interesting character to follow from beginning to end. The audience will be on her side to start when they see a young deaf girl save her mother. Getting her hearing back seems like a good thing, but keeping that ability will prove costly for her, and especially others. Those who enjoy Jigsaw’s traps should appreciate her combination of music and torture.  The bloody visuals are a plus for the audience while she enjoys the bright flashes. The big question will be whether the audience stays on her side as each murder is committed. With the sweet “Sound of Violence,” I give the film 3.5 pools of blood!