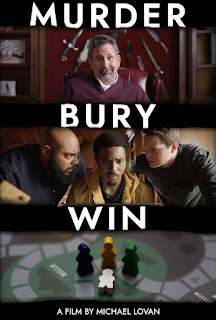 Three friends have created a board game, MURDER BURY WIN, and they think it has what it takes to become a bestseller on the indie charts. When their attempt to crowdfund fails, a mysterious man makes them an offer: he will publish their game on the condition that he takes credit as the sole creator and owner. After a dispute over the gaming rights leaves them with a body on their hands, the young men realize how suspiciously like murder the freak accident appears. Now, with few options remaining, they look to their game for guidance. The premise of their game? How to murder someone and get rid of the body.

“Murder Bury Win” is the name of the game. No literally, it’s the name of the game that Chris (Mikelen Walker), Adam (Erich Lane), and Barrett (Henry Alexander Kelly) invited. They’re still fine tuning it, but have started a crowdfunding campaign to raise money to create it. The campaign doesn’t do so well leaving them questioning what to do next. Then Adam gets a call from someone who’s interested in talking to them about it, and he invites them to his cabin.

Out of options, the three friends decide to take the meeting. They meet a man named V.V. Stubbs (Craig Cackowski), who has some recommendations for them. They eventually sit down, play the game, and talking about improvements. Once that’s done V.V. offers to take the game off their hands. The three friends can’t agree on what to do, and don’t really want to part ways with the game. Before they can make a decision, fate seems to make it for them, and now they’re going to play the game for real.

What a cleverly written film this turns out to be. It relies heavily on the dynamic between three friends, and the increasingly crazy situations they find themselves in. As the audience gets to learn about the game, they also get to know the three friends and what they want out of the game’s success. Chris seems happy with having his name on the game, and being recognized for it. Adam would be content with a good pay day, and Barrett seems alright with them doing the best job they can and the happiness of his friends. The audience should also find V.V. an interesting character for the time he sticks around.

Of course things pick up when the friends actually find themselves with a dead body on their hands, and try to rely on the game to figure out what to do next. They argue and panic setting up some funny moments. With the difficulties they have getting rid of it the audience and friends will see why the game had some room for improvements. There’s not as much blood and guts as there could’ve been, but the film never is about that. Instead the film will reveal its true genius in the final shot, and should leave the audience with a big smile on their faces.

With a title like “Murder Bury Win,” the audience could have expected another horror movie where a bunch of people are killed in some lunatic’s crazy game. Instead it’s about three friends who are looking to create a board game for their own reasons, and get more than they bargained for when faced with playing it for real. Mikelen, Erich, and Henry mix so well together, and are great in the situations their characters find themselves in. The audience will be entertained from beginning to end, and hopefully by that end see just how well crafted this entire story is! It certainly had me nodding my head with approval after the final moments and because of that I give it 4 pools of blood.