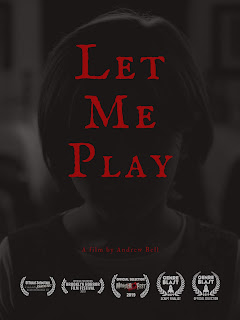 When a young girl is bullied by her older brother, a mysterious figure promises her the revenge she so desperately craves— but at what cost?

Directed and written by: Andrew Bell

Kids are always asking to “Let Me Play,” but sometimes that doesn’t work out for them. Nanna is watching over brother and sister, Grace and Mark. Mark is the older brother, and he has no problem letting Grace get in trouble. When Nanna yells at her again, she gets a surprise visit from a little boy. A little boy who’s a ghost, and offers to help her out with her bullying problem. She’s tempted, but her innocence holds her back…while she can.

First off, these kid actors do a fantastic job especially Juliet who most of the pressure is on. The little boy is creepy, and they do a great job of where he’s placed when he shows up. Probably the best thing here are the twists and turns. This short could have ended several times, but they continue to push the limits and the scares. Check out the film below, and see for yourselves…