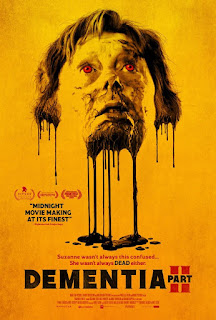 Suzanne wasn’t always this confused. She wasn’t always dead either - When an ex-con take a job as a handyman for an unstable elderly woman to avoid a parole violation, it becomes a choice he may regret.

Directed and written by: Matt Mercer and Mike Testin

“Dementia Part II” isn’t going to be something you forget for a long time! Wendell (Matt Mercer) has no choice but to prove that he’s working, or he faces violation of his parole. Obviously he doesn’t want to go back to prison, so he gathers his tools and heads off to do a job as a handyman. He ends up knocking on the door of a woman named Suzanne (Suzanne Voss) to do some repairs.

Suzanne is cautious but opens the door and her home to him. She’s might seem a little off, but also seems like she’s happy to see someone. She shows him around, and talks a lot about her husband. Finally Wendell begins doing some repairs, and Suzanne insists on tipping him as he goes. Everything is alright until Suzanne suddenly forgets why he’s in the house. Her confusion becomes more frequent, and things take a turn for the bizarre.

This film does an excellent job of taking a simple situation taking it down a dark road. It starts as basically just a handyman doing some work for an older woman. However, the handyman has no idea the woman is suffering from dementia and maybe some other mental issues. He overlooks things like her husband’s gun collection, weird things in the kitchen, and her forgetfulness because he needs the job.

The true fun doesn’t begin until Suzanne’s daughter Shelia (Najarra Townsend) and Wendell’s parole officer Reggie (Graham Skipper) show up. Shelia adds a little light on Suzanne’s condition, and comes with a twist of her own. Reggie brings some tension to the situation, and later provides an interesting meal. Before it’s over Suzanne is going to get bloody, gooey, and super messy! Oh what fun Suzanne, the actress, must have had while doing a great job in her role.

Learning how quick this “Dementia Part II” came together definitely adds to my appreciation for it. Again, it seems like a simple story, but they really inject the horror into it. Suzanne seems so nice, but completely loses her mind before it’s over. The film gives audiences several disgusting moments, which work even though the film is in black and white. Sheila and Reggie’s characters add just what is needed to complete everything. The audience will get great performances from everyone, but especially Suzanne and Matt. With that, I won’t forget to give it 3.5 pools of blood.