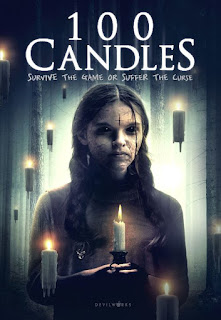 A group of friends reunited to play a game. Each one of them spect to get something about it. The rules of the game are to tell a story of horror for each candle.

“100 Candles” can be used in a romantic setting or when telling some horror stories, and of course that’s what fans get here. A group of friends have come together in a home to play the 100 Candles Game. Basically they each have to tell a horror story, and then go to a room to blow out a candle. If they don’t finish the game by blowing out 100 candles they’ll supposedly be cursed by a witch.

The game here is used to set up an anthology of short horror films. In between some arguing amongst the group, each friend starts their stories before the audience is taken into the story. Once it ends the audience will find that person in a room blowing out a candle. As this goes on some strange things start happening to them in the room. It seems they're in trouble before they even get a chance to finish the game.

The first story gets things off to a good start. It features two young girls ending up on a see-saw together. Things get exciting when one reveals their true identity. Another story gets kind of intense with a father and son hiding from something that’s in the fields surrounding their house. The son is curious and comes close to getting discovered by whatever is outside. The father seems to save him for the time being, but eventually what’s out there will be revealed. It probably won’t be what fans would expect.

Overall, the individual stories are well made, and fans should be able to find at least a few of them enjoyable. Some are bloodier than others, and some may try to be a little scarier than others. Each at least tries to lead the audience one way, and finish with a some sort of twist. The acting in the stories is also solid allowing fans to enjoy what’s happening.

While the game is a great set up for the anthology here, that story might not end up being as entertaining as the shorts. Yes, it has moments where the friends are haunted by the witch, but it doesn’t seem to end with the same punch that most of the shorts do. Still that doesn’t mean this anthology should be overlooked. If fans like horror shorts, there are certainly some worthy, and well done ones to be seen here. With that, it's time for me to blow out the candle and give it 3 pools of blood.