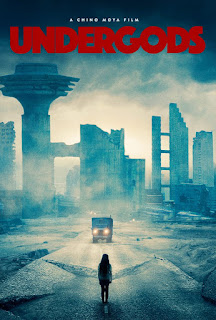 An otherworldly journey through a Europe in decline - a collection of darkly humorous, fantasy tales about ill-fated characters and doomed fortune.

Directed and written by: Chino Moya

“Undergods” can definitely be seen as the rulers of this world. The film paints a bleak future for this version of Europe. It creates a post-apocalyptic landscape with little hope and a lot of change. Here’s where the audience finds two men, who seem like garbage men, but are picking up bodies instead of garbage. As they drive around the wasteland, they begin the first of three different tales that will be told.

The first story is about a couple who invite a stranger into their home, and have a hard time getting him to leave. The man quickly becomes friends with the wife while the husband gets more jealous by the minute. Things get interesting when the husband is eventually told that his wife and himself should be the only ones living in the building. The real surprise will be for the next people who move into the building.

That brings the audience to the second story, which starts with a meeting between a businessman and a foreigner. The foreigner is odd and very possessive of his plans. The businessman thinks he can fool him and steal those plans, but the foreigner is no fool. He steals an even more valuable possession from the businessman causing him to go on a bizarre hunt to get it back.

The third story is about another couple and a strange man. Strange because he doesn’t say anything, but not unknown to the wife. It’s her ex-husband who she thought was long gone. She won’t turn her back on him even as her current husband grows more frustrated by the moment that the ex is still around. Things spiral out of control for all three of them, and it ends in a somewhat unexpected manner.

All three tales involve a family dynamic in some way. Love, jealousy, power, and more turn them deadly by the end. The deadly part should be appreciated even though the audience will have to get through some odd moments. Also, the mix between the tales, and this new world that’s created is a little confusing at times. It seems like they want to explore this world a little, which sometimes blurs the line between where the tales fall in the overall story. It actually would have been nice to see more of this new world because they create some great visual moments. I’m no Undergod, but I will give “Undergods” 2.5 pools of blood.