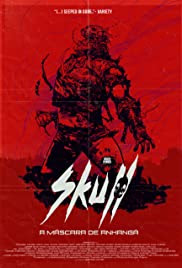 The feature film is an action-packed horror flick depicting a supernatural serial killer based on pre-Colombian mythology in a hunt for revenge in the metropolis of Sao Paulo.

Directed and written by: Armando Fonseca and Kapel Furman

“Skull: The Mask” that you’ll want to wear come this Halloween! The mask is a Pre-Columbian artifact that contains the spirit of Anhanga, the executioner of the god Tahawantinsupay. The mask is on the move and supposed to be put in a museum. However, along the way it lands in the hands of a young woman who performs a ritual which awakens the mask. It kills her and her friend, but that’s only the beginning.

During the clean up of those murders, the mask attacks two more people, and actually attaches to one of their faces. Supposedly whoever wears the mask is possessed by Anhanga and compelled to commit sacrifices to resurrect his god. The mask now takes the body for a ride, and kills person after person. A policewoman is tasked with solving the case with the help of a museum assistant before it’s too late! 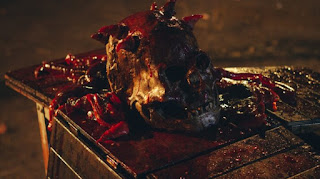 Being a Brazilian film, it certainly has its own style. Whether fans have seen a lot of Brazilian horror films or not, they’ll recognize one thing about this film. It’s all kinds of bloody and gory goodness. The mask by itself is pretty cool because it has legs like a spider that come out to attack people. Once attached to a person, that person can take up the fight with extra human strength and ability.

Speaking of fighting, some of the fighting plays out like a brutal wrestling match. One of the best scenes might be in a club where the mask decides to rack up the body count. In another fun fight, a priest pulls out a sword from an unexpected place, and goes to battle with the mask. Fans will hopefully enjoy these moments so much they might forget about the investigation that’s going on, and hope it’s not solved so that the carnage can go on. 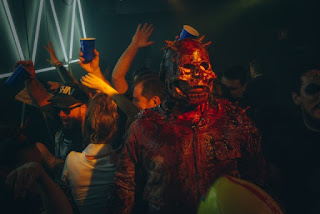 Setting up some of the backstory to the mask, and its history might be somewhat confusing, but that’s alright. There’s no need to worry too much over that, or the investigation that’s happening. If you’re a slasher fan, and a fan of blood and guts like me, then you should enjoy everything else about the film. The body count will continue to rise, and mask will stop almost everyone that gets in its way. It will bring the pain, and spill plenty of blood along the way. All done as practical as possible just the way fans like it. With that, I give “Skull: the Mask” 3.5 pools of blood!