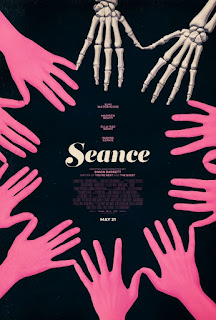 Camille Meadows is the new girl at the prestigious Edelvine Academy for Girls. Soon after her arrival, six girls invite her to join them in a late-night ritual, calling forth the spirit of a dead former student who reportedly haunts their halls. But before morning, one of the girls is dead, leaving the others wondering what they may have awakened.

Directed and written by: Simon Barrett

You never know what you’ll conjure up once a “Seance” begins. The film opens with a seance in a dorm room amongst a group of girls, and it leaves one of them shaken up. The others think they just pulled off another one of their scary pranks, and are enjoying the success of it. Upon running back to her room things go from tears of joy to tears of sadness when she ends up dead.

This opens the door for Camille (Suki Waterhouse) to be accepted into this boarding school. It doesn’t take her long to get introduced to the popular crowd, as she gets into a fight with Alice (Inanna Sarkis) and company. This lands them all in detention, and assigned a project to do together. They get distracted and instead try another seance, but this time to talk to their dead friend. It appears to work again, but is it another joke, their former friend, or the rumored ghost that has been roaming the halls for years? 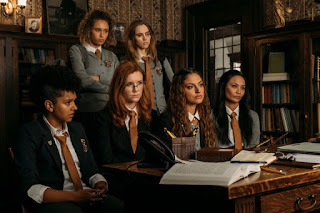 Early on the audience is going to be subjected to some of the drama between these girls. The group of friends are comfortable there, and have enjoyed their popularity. Obviously things start to change when one of their friends dies, and definitely when they’re challenged by the new girl. It doesn’t get any more serious for them than when more of the group starts disappearing!

This is when the real fun begins. They try to put together the clues, but can’t figure out if it’s Camille, or the ghost. The group gets thinned out by the time what’s happening is revealed. They snuck the reason it all happens earlier on, and the audience will finally get to see more of how each person dies before it ends. No spoilers here, but there should be some surprises for fans. It also leads to an exciting and bloody ending. Things definitely don’t go smoothly either, but that’s part of what makes this ending work. 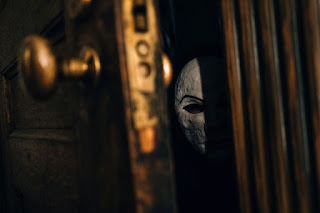 “Seance” will have a group of girls put a spell on the audience early on. The audience will watch them play games on each other, and then do some in-fighting. Things will eventually get serious enough when most of them have gone missing. It’s a good mystery that leads the audience towards one genre, but concludes in another. For fans waiting on the blood, they’ll get a nice dose of it in the end. With that, the seance is over and I give it 3.5 pools of blood.