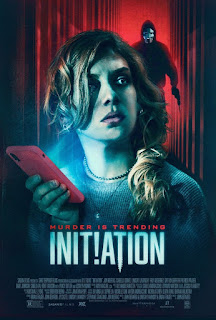 Whiton University unravels the night a star-athlete is murdered, kicking off a spree of social media slayings that force students to uncover the truth behind the school’s hidden secrets and the horrifying meaning of an exclamation point.

It’s time for your “Initiation” to this movie. The film opens with a fraternity and sorority having some fun. The houses are holding some initiations, and later a party to celebrate. During the party, one of the girls, Kylie (Isabella Gomez), is found passed out in a bedroom with a few guys in there as well. Ellery (Lindsay LaVanchy) gets her out of the room, but no one is sure what happened in there.

The next day Ellery questions her brother Wes (Froy Gutierrez), who was one of guys in the room, about what happened. The two argue with nothing conclusive about what went on in there. Kylie thinks she might have been raped, but can’t really remember enough to be certain. Wes has also seemed off since the night before, and struggles through the rest of his day. It doesn’t end well when he’s brutally murdered setting off panic between the two houses. 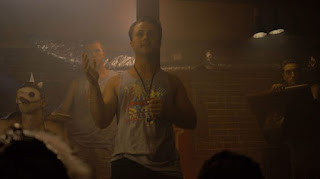 The film is built around a serious issue, and they handle it with the respect it deserves. The girls seem to be aware of the possibilities of rape, and try to use a buddy system to prevent it. It didn’t save Kylie, but Ellery couldn’t have been more concerned for her. They show the struggle Kylie has with whether to come forward or not, and her attempts to remember what happened. They also show the seriousness, and panic an on campus murder can create.

And it’s finally when Wes is murdered that the slasher fun begins. With the way he’s left hanging, it seems the killer is certain Wes played a role in the rape. Wes won’t be the only one who suffers at the hands of this killer with a glassy looking mask. There will be some more brutal deaths to come, but the killer’s identity will be a challenge to figure out. Once it’s revealed, it will all make sense and create a shocking moment for the survivors and hopefully the audience.

“Initiation” is a slasher film, but one that maintains a serious tone to it. The opening moments might hint at another movie with clueless college kids, but these young adults are well aware of the challenges and most of the dangers in front of them. The audience will see that just because they’re prepared doesn’t mean it won’t happen. The movie tackles how difficult dealing with rape is, and then compounds it with a killer on the loose. They even show how social media can play a role in the aftermath. With that said, your initiation is over and I give the movie 3 pools of blood.