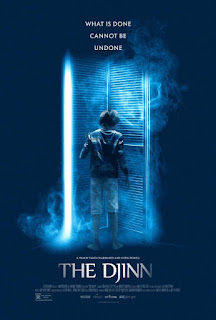 A mute boy is trapped in his apartment with a sinister monster when he makes a wish to fulfill his heart’s greatest desire.

Whether it’s a genie or “The Djinn,” they’re probably not going to grant you the wish you’re looking for. Dylan (Ezra Dewey) and his father Michael (Rob Brownstein) are getting settled into a new apartment. Apparently an apartment where an old man recently past away, and left some of his things behind. While going through the closet Dylan finds a strange book called, “Book of Shadows.” Before he can get into it his father tells him it's time for dinner. It’s here that the audience finds out Dylan has no voice, and can only wish for it to return one day.

At dinner the audience will also see the bond between this father and son. The love is there because they’re both still mourning the loss of their wife and mother respectively. As dinner concludes, Michael heads off for his night shift leaving Dylan to entertain himself. Of course he can’t help himself, and goes back to the book. He reads about a spell, and having a wish granted. He obviously wants a voice, and goes ahead with the spell. Just when it looks like it didn’t work and he hits the bed, he’s about to be awaken for a long night ahead.

Sometimes movies have to go a long way to get the audience to root for certain characters. However, they don’t have to do too much in this one. Maybe the audience will kind of feel sorry for Dylan right off the bat because he can’t talk, and especially when he shows the big scar on his chest. He seems so sweet when signing with his father that it’s easy to forgive him when he starts reading through the book. Then the biggest reason to be on his side is revealed when the audience sees the final moments of his mother’s life.

The audience will then have nothing but concern for him once the Djinn appears, and comes hunting for his soul. It starts creepy in the form of an old man, and then much more serious in the form of someone more personal. Everything is contained within the dark home creating some good scares, and eerie images. Just because he can’t speak doesn't mean he isn’t a cleaver young man. He manages to find interesting ways to survive the night in hopes of getting rid of the Djinn. Get ready for the end because it will be shocking, and heart breaking. 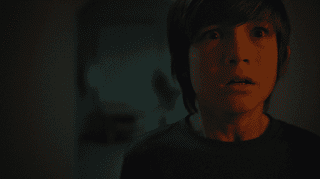 “The Djinn” is a horror story with creepy moments, and a couple of good scares. The atmosphere is dark, and it creates some tension watching the young man try to out smart the evil. The biggest surprise is how much this movie will pull on the heart strings of the audience. Dylan should win over the audience quickly regardless of his mistake in casting the spell and making a wish. He did it from the heart and with good intentions, but that’s what ultimately changes things for him. There’s tragedy and a shocking ending that will continue to weight on the heart’s of the audience. It all works because of a strong performance from Ezra. No wishes will be granted here, but I’ll  give the film 3.5 pools